From CPTDB Wiki
Jump to navigation Jump to search 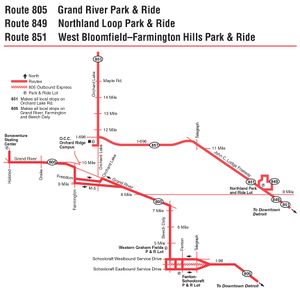 This route primarily services Orchard Lake Road between Lone Pine Road and Oakland Drive, Interstate 696 between Orchard Lake Road and M-10 and M-10 between Interstate 696 and downtown Detroit. Certain trips serving Wayne State University via Woodward Avenue. Service on this route is provided during peak/rush hours on weekdays only. This route is a park and ride route, so a $2.50 fare is required. This route only travels south to Detroit in the morning and north to West Bloomfield in the afternoon.